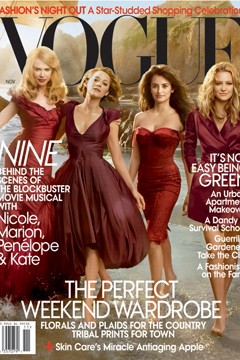 Apparently it’s not only Elle that’s featuring multiple cover girls for November. Vogue asked four of the seven stars of Rob Marshall’s movie-musical “Nine” to grace the cover of its November issue, shot by debt-laden photographer Annie Leibovitz on a beach in Malibu.

While their “Nine “co-stars Fergie, Judi Dench and Sophia Loren didn’t make the cut (you can find them inside the fashion bible) — Nicole Kidman, Marion Cotillard, Penelope Cruz, and Kate Hudson did.

Writer Plum Sykes got to visit all leading ladies backstage during a day of shooting, in an experience Sykes describes as absolute “icon overload.”

Valentino and his partner Giancarlo Giammetti stop by to see Loren, who says “Nine” is the best movie she’s ever done. While famed director Pedro Almodovar walks by in search of his muse, the rumored to be pregnant Cruz.

In addition to the bevy of A-list actresses, Daniel Day Lewis, the male lead, is in total method actor-zone when Sykes visits.

As for the film itself, it’s based on a Broadway film of the same name which was adapted from Fellini’s iconic 1963 film, “8 1/2.” Marshall, who also directed the six Oscar-winning musical “Chicago,” casted Fergie as a prostitute, Hudson as a Vogue reporter, Dench as a costume designer, Cruz as a mistress, Kidman as a movie star, Loren as a hot mama and Cotillard as a scorned wife.

On the London set where the movie was shot, Sykes finds the Hollywood heavy hitters fast friends, relating to each other as mothers, among other things.

“I don’t think there is any actress who looks forward to missing those days with her kids. But at the same time there is no one who wants to stop acting,” Hudson, who wears Uggs backstage, tells Sykes of the working mother conundrum.

While Kidman adds, “I had no desire to work after I had my daughter, but to lure me back, this movie was the only way.”

And Cruz is also looking to take a little time off (maybe those baby rumors are true!), “I’ve been working since the age of seventeen, and I really haven’t stopped,” Cruz tells Sykes. “I want to balance it a little more. Instead of making three or four movies a year, I will do one.”

Sykes also discovers that Hudson, Cruz and Fergie has been sharing a London apartment building and Cruz and Hudson have been going out together consistently — to eat.

“I’ve had some very long dinners with Kate, because she loves eating,” says Cruz. “I mean four-hour dinners. We are exercising so much we don’t feel guilty at all.”

But Fergie, who had to gain weight for her role, has halted exercising all together, instead, telling Sykes, she “started eating crap. I ate everything fried.”