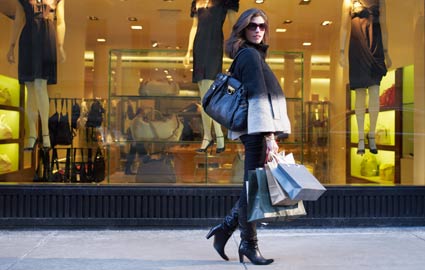 Treadmills? We don’t need no stinkin’ treadmills. Just give us a credit card and a ride to the mall.

According to a new study from ice cream brand Skinny Cow, the average woman burns a whopping 48,000 calores a year just by shopping, the Daily Mail reports.

And no, it’s not because we break out in a sweat every time we pass a pair of Jimmy Choos.

Apparently, walking around the shops makes for good exercise, causing the average gal to burn about five calories a minute, resulting in a total caloric loss of 47,700 calories per year, which adds up to 25 days’ worth of a woman’s recommended daily intake of 1,940, according to the paper.

In other words, shopping burns off nearly a month’s worth of food. Somebody pinch us.

These findings are based on the study’s determination that women make up to 132 shopping excursions a year, equivalent to 159 hours and 56 minutes spent walking at fast pace, the source reports.

The study, which polled 3,000 women, also found that 52 percent of respondents reportedly felt more fatigued after a day of shopping than after a trip to the gym. Seven out of 10 women also reportedly claimed to be completely exhausted after shopping.

“Women love to shop, so what better way to get into shape than to exercise at the January sales,” a Skinny Cow spokeswoman told the paper.

“If women planned to spend two hours at the shops, rather than the average one hour, they could double their calories burned each month to a staggering 8,000 — just through shopping.”

That’s it. If anyone needs us, we’ll be at Barneys.

Before you hit the racks, check out this study that says gaining weight could hide wrinkles.