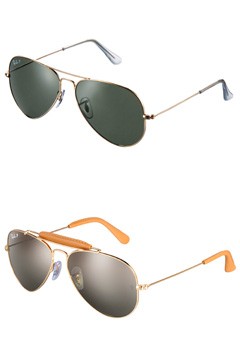 We know, we know. Your future’s so bright, ya gotta wear shades.

Lucky for you, Ray-Ban has a new line of Aviators so you can channel your inner Erik Estrada.

The iconic sunglass brand has relaunched its classic Aviator style with six “fly” new styles, according to a company press release.

Last night Brooklyn, New York’s Music Hall of Williamsburg played host to rockers Iggy & The Stooges and The Virgins as the label toasted the launch with a fashionable crowd that included Chloë Sevigny, Kate Bosworth and Agyness Deyn.

But about those shades…

Along with the classic Aviator (think Maverick in “Top Gun”), the new styles include the leather-trimmed Ray-Ban “Craft,” the black-edged “Road Spirit,” the sleek “Titanium,” the lightweight “Tech” made with carbon fiber, the colorful “Metal Glide”, and the ultra-luxe, 22k gold-plated “Ultra Gold” with P3 lenses.

The launch also included the unveiling of a photographic series taken by lensman Kevin Cummins, which features musicians from The Virgins, Free Energy, The Big Pink, The Plastiscines, and We Are Scientists wearing the sexy new shades.

“We live in a world of nostalgia at the moment,” Cummins says in a press release. “But I think you can recreate a classic without just copying it in a very dull way.

“What Ray-Ban have done, they’ve worked really hard to make this huge range that are contemporary, but have classic overtones. When you get the new bands to wear them, the Aviator looks really contemporary.

“All the bands we’ve worked with are very different and all respond in a very different way to being photographed. That’s reflected in the range of glasses; because each range has been really different.”

“Ray-Ban is the number one brand in eyewear globally and it has such a huge history of success,” adds Ray-Ban brand director Sara Beneventi.

“The launch of the new models of Ray-Ban Aviator sets a new milestone in Ray-Ban‘s continuing evolution towards being one of the most iconic brands globally.

“We are proud of being still today at the verge of the exciting world of indie-rock music which is perfectly expressing the
personality of Ray-Ban.”

Available now, except for the “Tech” model, which will hit stores in July, the sunglasses range from $139 to $485.