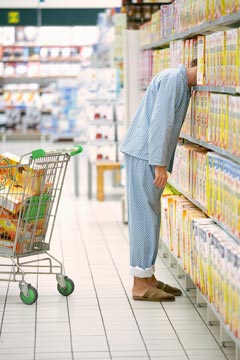 No shirt, no shoes, no service — got it?

Oh, and no jammies either.

UK supermarket chain Tesco is laying down the law with a new dress code banning bare feet and “nightwear,” the Daily Mail reports.

The Tesco superstore in St. Mellons, Cardiff, Wales is the first British supermarket to introduce a dress code, according to the paper.

“To avoid causing embarrassment to others we ask that our customers are appropriately dressed when visiting our store (footwear must be worn at all times and no nightwear is permitted),” signs posted at the store’s entrance reportedly say.

Staff members told the paper they put up the signs in response to mothers doing their shopping in pajamas after dropping their kids off at school.

“We do not have a strict dress code but we don’t want people shopping in their nightwear in case it offends other customers,” a Tesco spokesman told the source.

“We’re not a nightclub with a strict dress code, and jeans and trainers [sneakers] are of course more than welcome. We do, however, request that customers do not shop in their PJs or nightgowns.”

While we stopped wearing our flannel jammies to pick up milk back in college (don’t judge), some Tesco customers are demanding their right to a supermarket slumber party.

“It is ridiculous and stupid,” 24-year-old PJ-clad mom Elaine Carmody, who was asked to leave by a security guard, told the paper.

“I’ve got lovely pairs of pajamas, with bears and penguins on them. I’ve worn my best ones today, just so I look tidy.

“I walked in with my trolley [shopping cart] and the security guard came over and told me to leave. He said it offends people. But I’ve never seen anyone offended.

“You see loads of people going in wearing jogging bottoms, what’s the difference?”

“This is just pathetic and shows how snobbish some people can be,” another disgruntled shopper reportedly said.

This isn’t the first time pajamas have been battled across the pond (and who can forget Shanghai’s attack on sleepwear in public?). Belfast school headmaster Joe McGuinness recently ruffled feathers when he posted a notice saying that parents coming to pick up or drop off their children in pajamas were “slovenly and rude,” according to the Daily Mail.