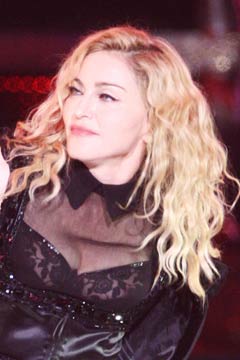 While vacationing in Spain last month, I happened to be staying at the Hotel Arts Barcelona when the juggernaut of Madonna and her “Sticky & Sweet” tour checked in.

It was almost as if the hotel had suddenly begun pumping pure stress hormones through the ventilation system, with Madonna flunkies scurrying through the lobby and vainly trying to carry on panicked cell phone conversations in moving elevators.

So it was surprising that Andy Lecompte, the star Los Angeles stylist charged with tending her famous blonde locks while on tour, should be the calmest of the bunch.

Lecompte talked to StyleList about keeping the world’s hottest pop star looking cool during the summer leg of a tour that plays 30 European dates in barely six weeks — and the product he’s “obsessed with” to keep her looking good.

“Some of the challenges?” Lecompte emailed from Russia, “That would be four countries a week, plus humidity, sweat, quick changes. We don’t have to do the same hair each time but Madonna’s shows are very planned and rehearsed.

Once I design a look for a show with the cut and styles and we decide what we’re doing, we don’t vary from it, aside from maybe an occasional part change from middle to side.”

Unlike most salon clients, of course, when Madonna leaves Lecompte’s chair she has to look good through an entire concert on stage. “Usually when I create a look for the show I take into account that I want the style to wear and last through the entire two hour performance,” he says.

“We usually go with some variation of curls as this is Madonna’s natural texture and works best with humidity and moisture. This is my third major tour and I have done two promo tours, so we have managed to make many changes and looks. Madonna is an incredibly inspiring artist to work with.”

Lecompte has a list of celebrity clients (like Mariah Carey, Britney Spears, Justin Timberlake, Penelope Cruz and dozens of others) that would be the envy of any Hollywood hair stylist. He’s even butched up the brunette fleece of pop culture’s reigning male hair-lebrity, Zac Efron.

“Fashion photographer Steven Klein was shooting the cover of Details, and had requested me to do the shoot,” Lecompte recalls. “Steven wanted to something different with Zac; he wanted to see a rougher, tougher grungy side. I think Zac was very open to all of the creativity on the shoot.”

“Some of my favorite product lines are René Furterer and Leonor Greyl,” he says. “I love the hairsprays from Leonor Greyl and shampoos from all of them; I am obsessed with the Leonor Greyl masque quintessence, it really moisturizers and reconstructs the hair, yet nourishes it.”

Asked to advise clients on choosing products for their home, he says: “One thing that always sells me is if I can rub it into my skin. I like products that rub into the hair, and nourish it rather than sit on top. Put it this way, if I have to wash my hands to remove the excess product, then I don’t want it. I like hair to be free and touchable — I want to see hair move, not weighed down and greasy.” Judging by the nervous looks on her team at the Hotel Arts, if Madonna thought her hair was “weighed down and greasy,” the talented Mr Lecompte would not enjoy his current position as her right-hair man.