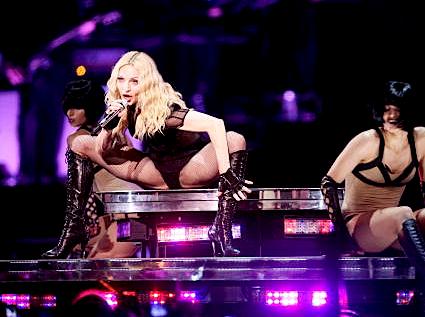 Madonna’s descent from fashion icon to pop-music has-been continues. Recent photos from the star’s Sticky and Sweet tour are more or less what you’d expect — overtly sexual, with pseudo-S&M costumes and plenty of ladies spreading their legs for the camera.

We’re sure this was cool in the 80s, and then again throughout the 90s, and then maybe even a couple years ago, but let’s be real: this is looking a little tired — particularly for a woman in her 50s.

On the bright side — always the provocateur — Madge thrilled audiences with a little partisan banter, comparing John McCain to Hitler and Barack Obama to Ghandi. No matter how you swing politically, Madonna’s, uh, positions on the issues are always entertaining.