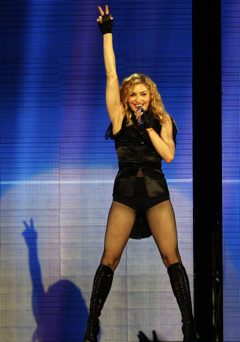 Madonna is donating a pair of her Christian Dior shoes to a Romanian charity supporting Gypsy child education, reports The Associated Press.

The “skyscraper gold heels” autographed by her Madge-sty will be auctioned off at the Ovidiu Rom’s annual ball taking place at the end of the month in Bucharest, reports The AP.

According to the source, the provocative pop star was booed by the audience in Bucharest during an August concert on her “Sticky & Sweet” tour after saying widespread discrimination against East Europe’s Gypsies, also known as Roma, should end.

“Madonna’s very mild comment regarding equality shone a spotlight on a common European attitude toward Gypsies. We’re thrilled to have her donation because she is such an icon of innovation and vigor and ‘can do’ spirit,” Leslie Hawke, president of Ovidiu Rom, told The Associated Press

Ethan Hawke, who happens to be Leslie’s son, will attend the ball and speak to the guests, says the source.

See which celebrity donated her Birkin bag to a good cause.