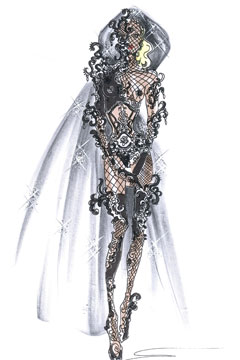 Sorry, naysayers, but if loving Lady Gaga is wrong, we don’t wanna be right.

The Italian designer, who has designed costumes for the envelope-pushing pop star’s concert tour, was the brains behind the racy head-to-toe bodysuit she wore while performing her single “Alejandro” on last night’s “American Idol.”

“‘American Idol’ is a real modern phenomenon that has captured the public’s imagination and delivers great drama,” Armani said in a press release.

“It is fitting then that the show is to host another modern phenomenon who has proved to be fascinating, and whose every appearance is a piece of theater: Lady Gaga.

“Dressing Lady Gaga for the Grammy Awards, the Metropolitan Museum of Art’s Costume Institute Gala, and now for ‘American Idol’ has been a very exciting project.

“To complement the spirit of Lady Gaga herself, I have let my imagination run free, and the outfit I have created for her for ‘American Idol’ is pure fantasy.”

No kidding — that outfit’s the most over-the-top thing to hit the “Idol” stage since Adam Lambert.

Of course, the Gagster is no stranger to rocking the show’s boat. In 2009 she performed “Poker Face” in a sexy black and silver corset.

We can’t wait to see what the Double-G dream team comes up with next!