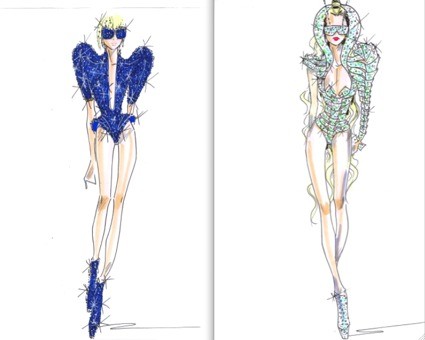 Turns out the Giorgio Armani and Lady Gaga affair is no bad romance. The silver-haired designer first teamed up with the platinum-selling songstress when he conjured up some pretty wild sci-fi confections for her Jan. 31 appearance at the Grammys.

Now the peculiar pair is reuniting, this time to outfit Gaga in select costumes for her Monster Ball world tour.

Judging by the designer’s sketches (above), the no-pants trend is alive and well — at least for Gaga. One look features a structured, royal blue sparkly bodysuit with padded, curved shoulders, while another — also a sparkly bodysuit (naturally!) — has a “lobster effect” on one sleeve.

While we prefer our lobster on a dinner plate, we think Gaga’s crustacean rendition actually turned out quite glamorous under Armani’s deft hand.

Other custom Armani costumes set to hit the stage include a geometric mini dress with mirror detailing (to go with her disco stick?), as well as a dramatic floor-length black patent trench.

And in a nice touch for a girl on the go, the designer has completed each stage ensemble with specially made matching shoes and sunglasses.

With Gaga making pit stops in Europe (the Monster Ball tour kicked off in the UK on Feb. 18) and Asia, Armani’s stage designs will surely be getting worldwide coverage, but could those custom outfits also be a labor of love for the pop star’s music?

“We hear Lady Gaga’s music everywhere we go, it is like a soundtrack of our times,” the 75-year old design legend said in a statement. “In addition to her formidable songwriting skills, she is a modern fashion phenomenon.”

We don’t know how many modern fashionistas sport two-tone locks crafted into a telephone hairpiece, but we’ll take Armani’s word for it!