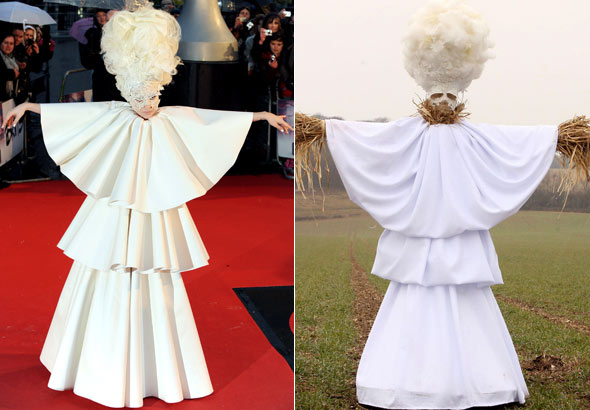 Apparently, not everyone is a fan of Lady Gaga’s envelope-pushing style: namely, birds.

British farmer Nigel Britten claims his farm has been pigeon-free since he dressed a scarecrow on his Surrey property as Lady Gaga, 3am reports.

(Makes sense. Everyone knows that birds are more into Katy Perry.)

Britten reportedly got the idea to dress his scarecrow in layered white sheets, face mask and towering platinum wig after seeing Lady Gaga’s identical getup at this month’s Brit Awards.

“We were laughing at Lady Gaga’s outfit and that extraordinary wig and talking about how scary she looked,” the wheat farmer told the source.

“We’ve been worried about the increasing audacity of birds on our farms for some time. I was tearing my hair out because the pigeons were taking all the corn after planting.

“I know it’s not a traditional scarecrow, but I suppose we have to move with the times. I don’t know whether it’s the dress or the hair but the birds daren’t approach the field anymore.”

Hey, whatever works. And if Gaga’s 15 minutes of fame ever run out, it’s good to know that she can always fall back on some farmwork.