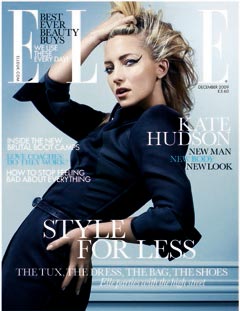 Aside from Alex Rodriguez, Kate Hudson reveals in an exclusive interview for the December issue of Elle UK that she and Madonna might have a few other things in common, too.

Explaining her new hard body, the actress says she’s been on a mission to lose 20 lbs. for an upcoming role portraying a terminally ill woman.

When asked what she currently weighs, Hudson replies, “I’m pretty solid, actually. I’m not, like, 110lbs. But I’m probably heading towards that.”

Yikes! We’re praying she doesn’t get as scary-skinny as Madge.

Kate Hudson slicked down in a Chanel bra and undies. Photo: David Slijper/Courtesy of Elle UK
The blonde beauty also tells the magazine that part of her weight loss routine involves ditching alcohol, which she admits has been hard.

“I love my glass of wine. I love tequila,” Hudson says. “To be in New York for two weeks and not have one [alcoholic] beverage! I’m not sure I’ve ever done that.”

The mother of one also claims her mug is Botox-free… for now. (Maybe the Madonna comparisons end here.)

“I was in a press conference once, and someone says, ‘So, I can tell you’ve never had Botox!’ Is that a compliment? Or are you trying to say I’m starting to get wrinkles?,” Hudson recalls in Elle.

“I literally was like, ‘What?’ Everyone’s so obsessed with who gets Botox, but it’s great! Are you kidding? The fact that women can avoid going under the knife, and get a little Botox treat and not have to worry about it? I’m glad it’s there for when it’s time.”