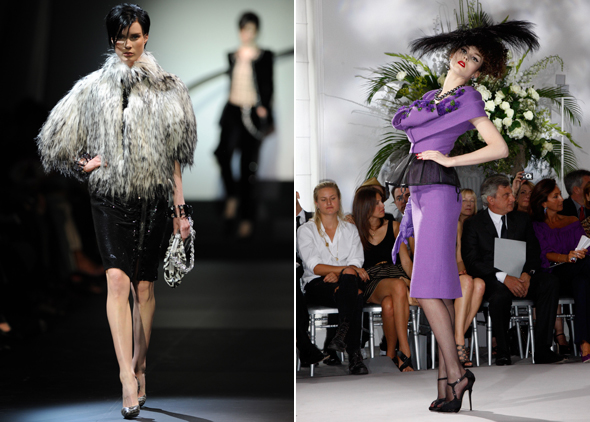 With only a handful of haute couturiers out there, you’d think scheduling fashion week would be an elementary affair. But this season is proving to be a challenge for Christian Dior and Giorgio Armani Privé.

While Christian Dior is listed on the official Chambre Syndicale schedule as showing on Monday, Jan. 25 at 2:30 pm, the French fashion house is also reshowing the collection at 5:30 pm for VIPs and paying clients. This later show made it impossible for Giorgio Armani to stage his show which was scheduled for the same day at 7:30 pm, so he’s unhappily moved it to 9 pm.

“I regret to inform you that as a result of a last minute, unexpected and unjustifiable change of program by Dior, about which we were informed less than two weeks before the date of the show, I have been forced to reschedule the timing of my own collection…

I would like to make it clear that the alteration, which is occurring in spite of our repeated attempts to arrive at a more satisfactory solution, is an action which I consider to be arbitrary and indicative of a lack of respect for other people’s time and labor.”

Scheduling snafus are de rigueur during the international ready-to-wear fashion weeks in New York, London, Milan and Paris. Hundreds of designers competing for time slots sometimes end up going head-to-head, dividing their fan base of retailers and media.

Haute Couture week in Paris is meant to be an über-civilized affair. There are fewer official haute couturiers, so there are fewer shows. Covering the couture shows is usually a lovely experience with breathtakingly beautiful clothing, long lunch breaks, high socialites on parade and a low-key celeb or two shopping for a special occasion.

A spokesman for Christian Dior told FWD “we think it is not elegant to comment.” Dior did not respond to StyleList’s emails.