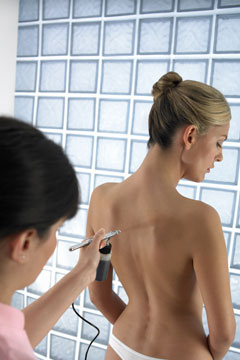 London’s Gatwick Airport is offering pasty jet-setters free St. Tropez spray tans after a poll found that vacationers would rather expose their cellulite or belly bulge than their pale skin, the Daily Mail reports.

Airport research found that 32 percent of travelers feel insecure about their ghostly pallor, while more than half admitted that a golden tan would give them a confidence boost on the beach, according to the paper.

And it’s not just women who are experiencing the pressure — 36 percent of men reportedly claimed that looking pale was their biggest vacation worry, versus 29 percent of women.

(Sounds like somebody needs a pep talk from Robert Pattinson!)

In response, the airport will be offering “Gatwick Glow” tans through Sunday, Aug. 1.

“Gatwick Glow is designed to give our passengers a boost,” airport marketing manager Kim Francis told the paper.

“We want them to head off on their holiday feeling great about themselves.

“And, with almost half of holidaymakers worrying about burning on the first day, we’ve partnered with St. Tropez to offer the spray tan facility so passengers can fly off already sunkissed, which we hope will prevent them from overdoing it on the beach.”

On the other hand, being stuck in economy class with countless other streaky, chemical-smelling Oompa Loompas isn’t exactly the kind of trip we have in mind…