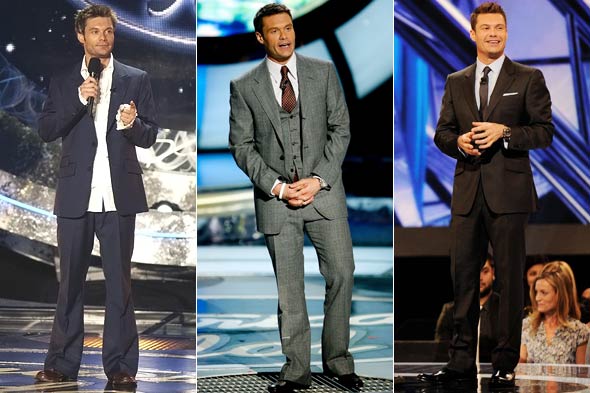 British stylist Miles Siggins has been cultivating the looks of aspiring pop stars on Fox’s “American Idol” since the series’s second season, when two of his all-time favorite contestants, Ruben Studdard and Clay Aiken, vied for the singing competition’s coveted title

While the dapper Siggins’s work with the sometimes fashion-phobic male contestants gets him plenty of attention, he is also the man responsible for the style evolution of host Ryan Seacrest.

And what a transformation!

“Pictures of Ryan five years ago and ones today really tell a story,” Siggins tells StyleList. “He’s gone from a guy who was always wearing T-shirts and spiky hair to a guy always in suits.”

These days, Seacrest wears 100 percent Burberry, made to measure from top to bottom, whenever he steps on the “Idol” stage. Siggins has all of Seacrest’s shirts and suits flown in from the United Kingdom, and even has extras made in case Seacrest stains his sleeve in ketchup or pops a button before going on air. Both of these mishaps actually happened, Seacrest admitted when he interviewed Siggins for his L.A.-based radio show last year,

Since convincing Seacrest to stick with a suited look — which he often accents with a skinny tie — the affable host has never questioned Siggins’s style pointers. “A custom suit is one of those things that once you’ve had it, everything else feels inferior,” Siggins tells StyleList. “I’m afraid I’ve ruined him.”

Siggins adds that the transformation from the more casual looks Seacrest sported in earlier seasons was deliberate. “We want a look that’s very center stage, which is his role,” he says. “He needs to stand out as host and not look like one of the contestants.”

Working in fashion since the age of 18 for designer Paul Smith in London, Siggins fancies suits himself and even his 2-year-old son, Alfie, wears them to look like Dad.

While he’s often managed to persuade some of the show’s male contestants to slip on a suit to give them confidence, Siggins tells StyleList he doesn’t outfit judges Simon Cowell and Randy Jackson. “Do you really think they would let me tell them what to wear?” he laughs.

StyleList ventures that perhaps Siggins would put Cowell in something other than those perpetually tight T-shirts, but he says he would rather break the brutal Brit’s baggy jeans habit. (It’s also something Siggins has worked on with some of this season’s male contestants.)

“Men, in general, need to pay more attention to fit. One of my favorite style tips for men is to always try the next size smaller just to see how something looks,” says Siggins. “Guys tend to buy bigger than they are, and something that truly fits your body looks so much better.”