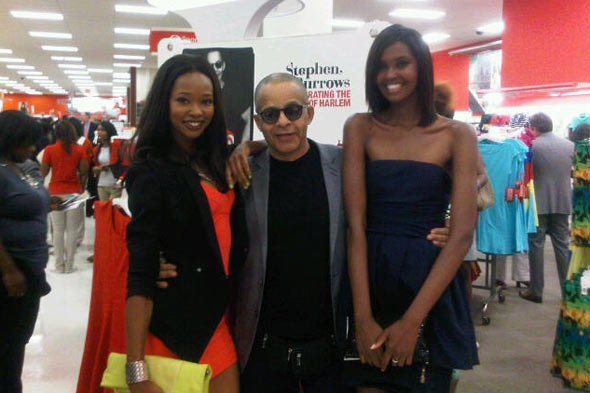 Stephen Burrows has had some week.

The designer opened a new studio space in New York’s Garment District after being based in Harlem for years, and he saw his first collaboration with Target hit the chain’s new East Harlem store.

“It’s right there in front,” Burrows tells StyleList of his Stephen Burrows for Target collection. “You can’t miss it – it’s really great.”

The East Harlem Target – Manhattan’s first – is scheduled to open Sunday, July 25 and the company celebrated the store’s opening by giving some local residents and VIPs a preview Tuesday evening.

Many of these items will be available in select Target stores and on Target.com after August 1.

Burrows celebrated his new studio Wednesday evening with a smattering of fashion types, including his signature models Pat Cleveland and Alva Chinn.

“It’s nice and airy, open-looking and modern, like me,” he says of his new space. “The windows got me right away,” he said of the walls of southern and western-facing windows. However, with New York’s current heat wave, “We have the biggest air conditioner in the world here and we’re still hot.”

In more ways than one.