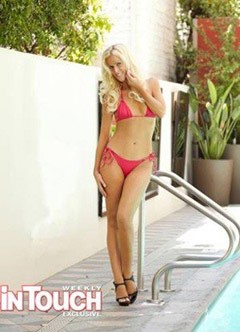 More housewife drama? What a surprise!

Our pals over at PopEater dish on the latest from Michaele Salahi, the “Real Housewives of D.C.” star who made headlines after crashing the White House state dinner.

Salahi is fighting off claims from her “Housewives” co-stars that she has an eating disorder. “I’m not anorexic!” she insists in the new issue of InTouch Weekly.

“I’m a skinny girl. I always was. I’ve never had an eating disorder in my life. And it hurts to be called anorexic.”

The eating-disorder chatter escalated on the show when fellow housewife Lynda Erkiletian said Salahi was “anorexic” and had slimmed down a lot.

“Honestly, I can’t believe those women have so much time to devote to my weight. If they get out there and move, they will look like me and be thin, and it’ll all be good,” Salahi adds.

When asked about plastic surgery, Salahi admits she’d go under the knife.


“Definitely. I would love to do a whole lot of Botox and maybe get collagen, too. I also think it would be great to have boobs. I’m a B [cup], so I’d get a C. I’m all for anything you can do to make yourself look and feel better,” she says.

Although she’s ready to enhance her assets as soon as possible, her husband, Tareq, isn’t as thrilled about the procedure.

“Hopefully, within the next six months,” she says of her surgery plans. “But my husband doesn’t want me to do my boobs!”

In related news, read about the tragic death of Heidi Montag’s plastic surgeon.