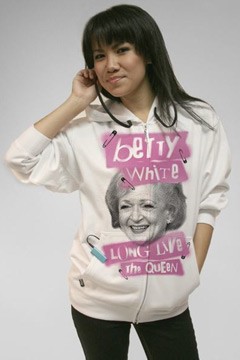 With a “Saturday Night Live” hosting gig and racy calendar under her belt, the 88-year-old actress is turning her eye to the world of fashion with a new unisex clothing line, according to a press release.

And we thought Cloris Leachman’s “Cloris Line” was exciting.

Apparel company Jerry Leigh has partnered with the octogenarian to produce the celebrity clothing line that consists of T-shirts and hoodies featuring the surviving Golden Girl‘s image; available now for $48 at HoodieBuddie.com.

A portion of proceeds will reportedly benefit one of White’s favorite causes, the Morris Animal Foundation. (As if you needed another excuse to buy one.)

“With Betty White’s star continuing to be on the rise, she was a natural fit for Jerry Leigh Apparel, as we pride ourselves on offering the most cutting edge developments in the apparel industry,” says Andrew Leigh, president of Jerry Leigh.

“With Betty dedicated to her philanthropic efforts with the Morris Animal Foundation, we knew this venture would be a good fit and it would appeal to the general public and Betty White’s extensive fan base.”

Besides being awe-freaking-some, the line is surprisingly fashion-forward (we were expecting embroidered kitten sweaters straight out of St. Olaf) — the “HoodieBuddies” feature earbuds and an input jack so you can rock out on the go. (“Thank You for Being a Friend,” anyone?)

Fierce — and just the thing to tide us over until someone finally makes a Bea Arthur line of silk pantsuits.