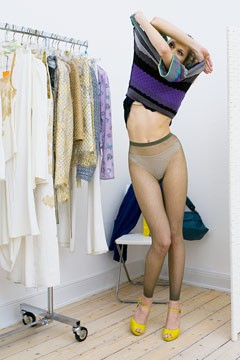 Crappy fluorescent lighting? Coffin-sized rooms? Mirrors that seem to zero in on every ounce of cellulite? Where do we sign up?

According to a new study from Lambrini wine, we women clearly love our dressing rooms, as we try on more than 21,000 items of clothing in a lifetime, the Daily Mail reports.

And, not surprisingly, most of those garments don’t make it out of the fitting room — we only buy half of what we try on, according to the paper.

Well, some of us do. The study of 3,000 women reportedly found that one in two women try on clothes with no intention of buying anything (guilty!).

But, on average, women reportedly shop four times per month, trying on 10 items of clothing per trip, with five pieces going back on the rack.

For those keeping track at home (or your accountant), that means we buy 240 garments a year, or 10,560 items over 45 years, the paper reports.

“For many women, trying on different clothes is often the best part of a shopping trip,” Lambrini’s Sue Beck told the Daily Mail.

“Hours are spent in changing rooms with friends trying on weird and wonderful outfits you wouldn’t ever dare wear out in public.

“It’s also an excuse for some of us to try on clothes that are designer and beyond our budget.”

Of course, some things do manage to make it out of the store, though 40 percent of women reportedly admit to changing their mind about a purchase once they get home.

Sigh — no wonder guys hate shopping with us.

In other shopping news, flashy designer logos are on their way out.